Skip to content
Español
News & opinion What Are the Main Causes of Motorcycle Accidents?

Home » News & Opinion » What Are the Main Causes of Motorcycle Accidents? Let’s start off with some good news: fatal motorcycle accidents have decreased across the nation in recent years. In fact, the National Highway Transportation Safety Administration reports a whopping five percent decrease in one recent year.

Still, we believe even a single death is tragic and preventable. Fatal and non-fatal motorcycle accidents still occur far too often and shatter the lives of riders and their loved ones. Accidents can happen any time, anywhere, to even the most responsible motorcycle riders.

Why is this our harsh reality? The answers often point to careless and reckless car and truck drivers who don’t know how to safely share the road with two-wheelers.

Bikers aren’t naive. They understand they have less protection on their bike than in a car, which is why most bikers prioritize safety, diligently follow traffic laws, and operate their motorcycles responsibly.

Safe bikers, however, can’t stop negligent motorists who think they own the road and don’t watch out for other traffic, especially motorcycles.

If you are involved in a motorcycle accident, you have a higher likelihood of fatality. If you’re lucky enough to live through the accident, you may still have debilitating injuries that will hound you for years to come, if not for the rest of your life.

Motorcycle accidents can leave victims unable to return to work. They often face a pile of medical bills, worsening their stress and anxiety. There’s also the physical pain of recovery and healing, plus the impact on family members who have to pick up the slack at home when an injured biker can no longer perform the same duties around the house.

If you’ve been fortunate enough to avoid accidents on your bike or you are new to the world of motorcycles, we want to fill you in on the causes of motorcycle accidents. Knowledge is power, and when you’re equipped with this knowledge, you can avoid falling victim to the inexperienced, careless, and negligent drivers out there on our roads.

This guide provides a broad overview of several negligent driver behaviors that cause severe and sometimes fatal motorcycle accidents.

Getting behind the wheel of a vehicle after drinking or using drugs is one of the most reckless things a motorist can do. Alcohol and drugs impair a drivers’ ability to process information while driving, and the impairment is often worse when both substances are present.

Impairment from alcohol and drugs makes it difficult, sometimes impossible, for drivers to react to traffic control devices, animals in the road, other vehicles, and road hazards. Delayed reactions, blurred vision, and impaired motor skills affect drivers after only a couple of drinks. They could weave or swerve and run right into a motorcycle. They may be unable to adjust their speed with a motorcycle in front of them and end up striking them from behind.

Some careless drivers never check their mirrors or clear their blind spots while driving, even when they’re sober! When alcohol or drugs are involved, it’s even more likely a driver will run into a motorcycle. Drunk and drugged drivers are especially dangerous at night. Motorcycles can be difficult to see for even the best drivers, but adding darkness to impaired driving is a deadly combination that can result in a fatal accident and painful injuries.

Remember that prescription drugs can impair a driver too. If car drivers don’t take prescriptions as directed by their doctor or mix alcohol with their prescriptions, they put everyone else on the road in danger, especially motorcycles.

If you encounter a noticeably distracted driver on the road, pull your bike over, let them pass, or get by them as quickly as you can. When drivers are distracted, it means their eyes aren’t on the road, their hands aren’t on the wheel, or their mind isn’t on the task at hand. Any one of these irresponsible behaviors can result in fatal crashes.

When drivers don’t pay attention to driving, they turn their vehicles into rolling death machines that can cause treacherous motorcycle accidents. This may sound dramatic, but most passenger vehicles weigh between 3,000 and 4,000 pounds, and a small motorcycle can be easily totaled.

When you hear about common driver distractions that cause accidents, you probably think of cell phones. It’s true that cell phone use, especially texting and driving, can lead to serious traffic collisions. Texting and driving is a triple threat because, as we said above, it takes a driver’s mind off driving, hands off the wheel, and eyes off the road.

To combat this bad habit, many states have implemented strict laws requiring hands-free use of cell phones and laws that prohibit young drivers from all cell phone use. Yet distracted driving has caused accidents long before cell phones were invented.

Driving a vehicle is not a responsibility to be taken lightly. It deserves your full focus. Drivers need to be mindful of motorcycles and other vehicles, as well as traffic regulations. When drivers get distracted, whether it’s by choice or by accident, they cannot respond to the information in front of them. This puts motorcyclists at risk for severe traffic accident injury. 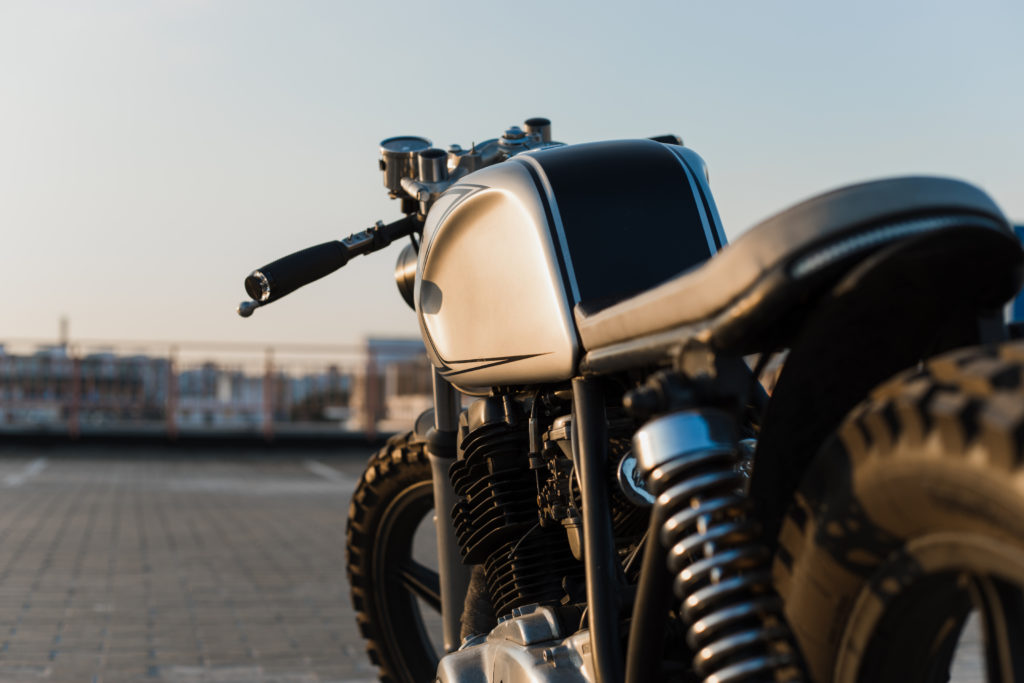 Speeding isn’t typically a direct cause of motorcycle accidents, but speeding is strongly correlated with a driver losing control of a vehicle. When drivers lose control they can swerve, rear-end, or strike a motorcycle on the side, causing severe injury. Speeding doesn’t only include traveling over the posted speed limit. It also includes drivers who aren’t smart enough or safe enough to slow down for bad road conditions, inclement weather, or heavy traffic.

Driving too slowly might not cause fatal accidents as often, but it can still lead to severe injuries when accidents occur, especially for bikers. When drivers go too slow they block the movement of traffic and create abrupt bottlenecks, which are EXTREMELY dangerous for bikers.

Slow drivers create the most danger for others when they travel in the fast lane of a highway or interstate. In many states, it’s illegal to obstruct traffic in the left lane of a multi-lane road; drivers must stay to the right unless they are merging into traffic, exiting to the left, making a left-hand turn, or going faster than other traffic.

Slow drivers in the left-lane can start a chain reaction, causing a multi-vehicle crash and putting bikers at high risk for accident and injury. Bikers who are involved in a multi-car pile-up are lucky to walk away. Many times, these crashes lead to a motorcyclist getting pinned between or stuck under vehicles.

Impatient and inexperienced drivers cause accidents when they follow others too closely. Teen drivers who haven’t been on the road long might not understand how important it is to leave enough space when following others, but impatient drivers of all ages choose to drive recklessly and tailgate others.

Driver education courses instruct new drivers to leave a “two-second gap” when following other vehicles. Defensive driving instructors go a step further and recommend a four-second gap, especially in inclement weather and high amounts of traffic. When a driver ignores these guidelines and follows close enough to cause an accident, they are breaking the law in most states and putting motorcycles at risk for a severe rear-end collision.

When drivers tailgate a motorcycle, they also risk running over the bike or biker. If the biker needs to apply their brakes or make a turn, drivers who tailgate don’t have the time or distance to react to the situation. When drivers are drowsy or impaired by drugs or alcohol, it makes matters even worse. Additionally, dangerous hazards on the road such as trash, tire rubber from a blowout, and wild animals can start a chain reaction when traffic is present. If a motorcycle tries to avoid these things, drivers who are tailgating might collide with the biker.

Most drivers don’t purposefully disobey stop lights, stop signs, and other traffic control devices. Instead, it’s often drowsy and fatigued drivers, drunk drivers, or distracted drivers who don’t properly watch for signals and signs. Regardless of intent, disobeying traffic control devices is illegal and can cause dangerous accidents at intersections. Motorcycles and other vehicles might not have the time or distance to avoid a crash when a negligent driver runs a sign or light.
Many drivers do, however, ignore “No U-turn” signs. Drivers who make illegal U-turns usually do so quickly without checking their mirrors or blind spots. It’s not uncommon for these drivers to overlook motorcycles who might be behind them or in a blind spot and ending up cutting one off, which can result in a dangerous and deadly motorcycle accident.

Another intentional example of ignoring traffic control devices is playing “beat the yellow light.” Reckless and impatient drivers don’t want to stop when they see a yellow light getting ready to turn red. Instead, they rush through the intersection. If traffic from the other direction starts moving, these drivers risk causing an accident. Bikers are especially at risk because the likelihood of an impatient and reckless driver noticing them is low. In rural areas, drivers sometimes choose to run stop signs because traffic is light or non-existent. All it takes is for ONE motorcycle to be traveling through the intersection, and the consequence is a deadly accident.

Failure to Use Turn Signals

Even the safest drivers forget to use their turn signals at times. For others, its laziness or complacency… or perhaps expecting the drivers around them to be mindreaders. A recent national study surveyed thousands of motorists and found only 75% of drivers use their turn signals when turning and almost half don’t use their turn signals when changing lanes. These startling numbers result in about two million traffic collisions per year across the nation, which the United States Department of Transportation reports as double the number of accidents caused by distracted driving.

Bikers are especially in danger when motorists don’t use their turn signals when they change lanes on interstates and highways. It’s easy for a driver to run into a motorcycle, as they may be difficult to see. Large semi-trucks traveling along interstates are especially dangerous for bikers when they don’t clear blind spots and use their signals. When a semi-truck and a motorcycle get in an accident, it’s highly unlikely the biker will live through the ordeal. When a biker sees a turn signal, they can slow down or change lanes to avoid a potentially severe traffic crash.

Consult an Attorney After a Motorcycle Accident

Even if you are a safe biker who wears a helmet and proper gear, and drives defensively, you still risk inexperienced and impatient motorists causing an accident while you ride. You shouldn’t have to shoulder the financial stress of your accident and injuries because a reckless driver couldn’t be bothered to follow traffic laws.